“My dear aunt: Just a postal to let you know I am still alive and well. I work every day in an electric light factory. Would like to see you very much. With love, I remain, your loving niece, Dollie Kane.”

I found this note on a postcard sent Monday, Jan. 31, 1910, from Newark, N.J., to the sender’s aunt, 150 miles away in Hallstead, Penn., not far from the New York border. The note sounded sad, and I wanted to know more about Dollie Kane.

Unfortunately, searches for these names gave me some information, but no exact matches. The closest match I found for Dollie Kane’s aunt was a Mrs. Sarah Jane “Jennie” Austin Decker, born Jan. 8, 1869, died Nov. 26., 1945, in Hallstead. But if that were Dollie’s aunt, would Dollie not have addressed the card with her aunt’s married name, Decker? Ancestry.com shows census records for other Austins in Hallstead, but searches for both surnames together—Austin and Kane—have come up empty.

Likewise, I cannot find a Dollie Kane. But here’s what I can surmise about her work: Electric light manufacturing employed thousands in the New York City area in the early 1900s. Less than five months after this postcard was sent, the New York Times reported under the June 20, 1910, headline “Westinghouse Co. Shows Heavy Gains”:

The operations of the Westinghouse Lamp Company, the Perkins Electric Switch Manufacturing Company, the Bryant Electric Company, and the R. D. Nuttall Company, have increased so largely during the fiscal year that their facilities must now be enlarged. Plans have already been made for these improvements. The Westinghouse Lamp Company’s New York factory on West Twenty-third Street, which has been closed since July, 1908, is being equipped to manufacture 10,000 Tungsten lamps daily, and will be in full operation before the summer is over.

The Newark postmark suggests, however, that Miss Kane lived and worked on the other side of the Hudson, perhaps Harrison, where Thomas Edison opened a factory in 1882 at Bergen and South Fifth Streets. By 1912, the Edison General Electric Company plant in Harrison employed 4,000 workers. It remained there until 1929, when a RCA bought the property and began manufacturing radio tubes there. Today, a small shopping center sits at the site.

A 1938 report of work hours in America found that the average electrical machinery worker put in a 55.4 hour work week in 1909—so chances are, Dollie was working 6 days a week. She probably bought and wrote the postcard on Sunday, her only day off, and mailed it Monday morning.

I’d love to know who Dollie and Aunt Jane were. For now, I’ll just have to imagine a young woman, working six days a week in a factory, missing her aunt in the middle of winter. She didn’t have the means to visit, but she took the time to buy, write and mail a postcard.

Say what you want about what technology is doing to our society, but it’s comforting to know that today, 116 years after that postcard was sent, goodbyes are not what they used to be. Most of our loved ones are just a phone call, plane ride or video chat away. We just have to use that technology to bring us closer, just as young Dollie used pen, paper and the U.S. Postal Service to connect with her aunt. 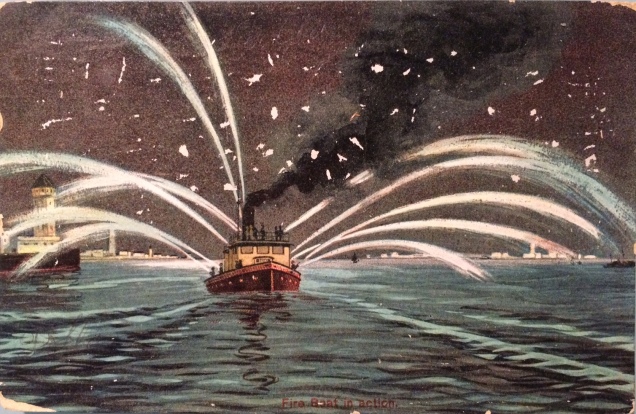