About an hour early to meet new friends for dinner at The Odeon in TriBeCa, I took the opportunity to wander around the northern end of Battery Park City. Created mostly on landfill and severed from the rest of Lower Manhattan by the West Side Highway, this roughly 25-year-old neighborhood gets a bad rap. Many New Yorkers I know look down on this part of town, probably because it is new and planned; it didn’t organically develop over time like most other parts of the city.

Like it or not, Battery Park City boasts impressive parks that are spotless, well-utilized and offer commanding views of the Hudson. On Tuesday, I enjoyed those views from Nelson Rockefeller park as I walked to the Irish Hunger Memorial, a monument to the famine of 1845 to 1852.

Created by artist Brian Tolle and dedicated in 2002, the half acre monument is made primarily of stones and grasses from Ireland. From the Battery Park City Authority’s brochure,

Central to Tolle’s project is an authentic Famine-era cottage donated to the memorial by his extended family, the Slacks of Attymass, County Mayo, Ireland. The cottage has been painstakingly reconstructed on the memorial’s half-acre site as an expression of solidarity to those who left from those who stayed behind. From the cottage, visitors to the memorial meander along paths winding through a rugged landscape thickly planted with native Irish flora, plants often found growing in fallow fields. Ascending to an overlook twenty-five feet above the ground, the visitor confronts a breathtaking view of the Statue of Liberty and Ellis Island beyond.

Part of the mission of the memorial is to encourage efforts to address current and future hunger worldwide. Thus, the walls surrounding the memorial are lined with quotations from accounts of hunger from around the world.

Below are some photos of the memorial. Looming above many of the shots is the new 1 World Trade Center, whose spire now reaches 1,776 feet above Lower Manhattan. 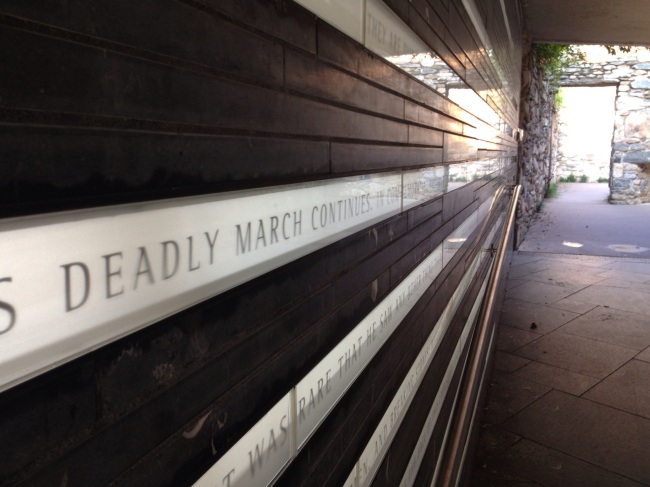