Of the approximately 900 bird species found in the United States, more than 200 frequent New York City on an annual basis. Yes, our concrete jungle is also a city of islands, with numerous parks and waterways, a place to encounter birdlife—and not just pigeons.

To get a better look at some of the waterfowl that make their part-time or full-time homes in our city, Audubon New York offers summer and winter cruises of New York City’s waterways. The winter cruise, which I took in February 2013 and again this past weekend, also showcases harbor seals, which migrate south every year and can be found in our waters from November through May.

Leaving out of South Street Seaport, the New York Water Taxi boat cruises through Buttermilk Channel and the Narrows, stopping along the Governors Island and Sunset Park coastlines to get a better look at the birds that congregate along the rocks. We then headed out toward Hoffman and Swinburne Islands, which have a fascinating history as quarantines for newly arrived immigrants found to have contagious diseases.

Harbor seals love these two islands off the coast of Staten Island, especially Swinburne. Though man-made, the islands are now off limits to us human beings. I saw dozens of harbor seals off Swinburne Island on my 2013 cruise, but sadly, only a few bobbed their heads above the surface of the water this past Sunday. A handful of us, including the Audubon narrator, braved the nearly freezing rain to stand outside on the upper deck and scan the water with binoculars, while most people stayed below and inside, enjoying the free hot chocolate and the view out the water-speckled windows.

In addition to the harbor seals, we also saw Atlantic brant, double-crested cormorants, wood ducks, long-tailed ducks, red-throated loons, buffleheads, mergansers and more. Many of these species mate only in the Arctic and spend their winters here in the waters off New York City. 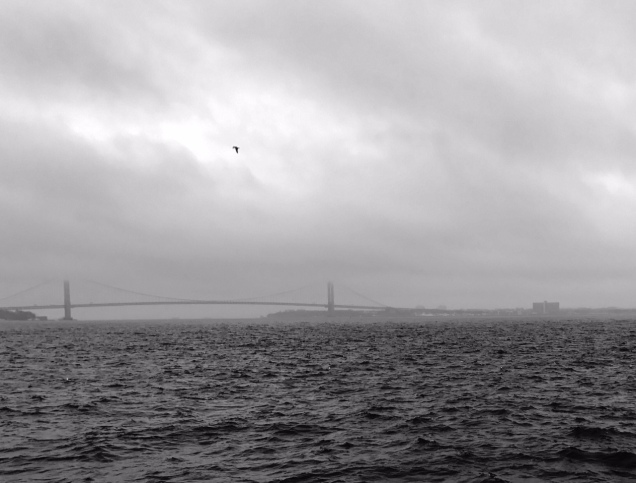 While a summer cruise on a weekday evening may be more pleasant, especially with a glass of wine and a beautiful sunset over the city skyline, I am nonetheless more fascinated by the birds and seals that venture here from the Arctic.

Both cruises show you a side of New York City that very few people see. Check them out!