It’s Springtime in Staten Island, too! A couple weeks ago, I posted several pictures of tulips and daffodils, pear trees and cherry trees, from Brooklyn and Manhattan. A friend of mine noted that I missed Staten Island, a especially grave oversight because I happen to live in Staten Island.

With the FDR Boardwalk here closed since Hurricane Sandy, my Brooklyn Half Marathon training has brought me to Clove Lakes Park and Silver Lake Park, which, like parks across the city, are bursting with brilliant yellow, pink and white blossoms. I’ll post some pictures below, but first, some background on the parks.

Clove Lakes Park is the more heavily used of the two parks, with a steady stream of runners and walkers taking advantage of its paths and recreational facilities that stretch from Victory Boulevard north to Forest Avenue. Centuries ago, a brook flowed through this area to the Kill Van Kull; but over the years, several dams have been built to create the lakes and ponds that now give the park its name.

The city acquired the land in the early 1920s, and in the 1930s, it was developed as a city park. Today, Clove Lakes Park is home to playgrounds, ballfields and an ice skating rink. It is also home to the oldest living thing on Staten Island, a more-than-300-year-old tulip tree, which drew a small crowd of admirers taking pictures of it Saturday morning.

Just to the East and almost adjacent is Silver Lake Park. To me, this park has a fascinating history. As I run along the serene paths on a Saturday morning, I try to imagine what this park once was:

Silver Lake has a long history of both recreational and commercial uses. During the 19th century, a casino and saloon existed on the lakeshore and several companies harvested its ice. Staten Islanders used the lake for boating and ice skating in that era, and in February 1897, Silver Lake hosted the National Skating Amateur Championship races.

Someday, I’d love to dig up pictures of the saloon and casino that once existed here.

Exactly 100 years ago, the lake was drained, and converted to a working reservoir, the endpoint of the city’s Catskill water supply system. The body of water currently at the center of the park no longer holds potable water (though it is clear enough to see rocks under a foot or two of water); it instead serves as drainage for underground storage tanks.

A picturesque causeway bisects the lake—so instead of running a 1.3-mile lap around the lake, I prefer to use the wide, paved causeway and run a 1.6-mile figure 8.

Silver Lake Park is also home to a golf course. I wonder, though, how many of the golfers know the history of the ground beneath the 18th fairway:

Land from Marine Cemetery, a nineteenth-century burial site for the Marine Hospital Quarantine in Tompkinsville, was added to the park in 1924. In 1928 the land was converted to a golf course, and in 1994 researchers discovered documentation linking the site to its past use as a cemetery. Today it is thought that perhaps several thousand immigrants, including many Irish escaping Ireland’s Potato Famine, who died from contagious diseases after landing in the United States are buried under the 18th fairway of the golf course.

On that uplifting note, here are some pictures of the two parks, showing off their Spring colors: 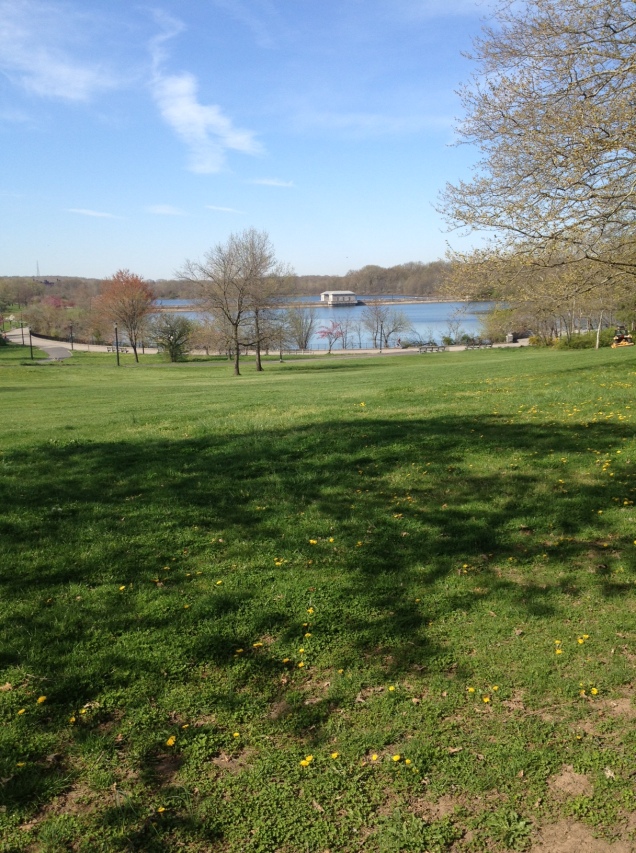 The first signs of Spring are evident throughout the boroughs this week. While daffodils have been in bloom for a few weeks now, tulips are on the verge of opening, and many pear, cherry and plum trees seem to be at their prime.

The Spring colors have been striking. Here are some photos I have taken over the last week in Brooklyn and Manhattan.

Most stories about Brooklyn these days have to do with gentrification, displacement and hipsters. But during Holy Week, the streets of Carroll Gardens felt more like the heel of Italy circa 1920 than the land of cupcake stores and American Apparel.

Court Street Pastry displayed marzipan lambs in its windows since before Palm Sunday. On Holy Thursday, a bus led pilgrims on a traditional visit to several local churches. And on Easter Sunday, sidewalks were filled with tulips, hyacinths and hydrangeas for sale.

But the most impressive tradition was Sacred Heart and St. Stephen’s annual Good Friday procession through the streets of Carroll Gardens. I have wanted to attend this event since I moved here eight years ago; this year, I finally did.

What I imagined would be a walk through three or four blocks of the neighborhood was instead a two-hour trip that zig-zagged as far as Court Street, 4th place, Degraw and then back to the steps of the church. Leading the procession was a statue of the body of Jesus, encased in a glass coffin. This was followed by a statue of Maria Addolorata, or Our Lady of Sorrows, dressed in black and pierced in the heart with a sword.

The statuary symbolizing both the Body of Christ and Mary the Mother of Jesus, under the title of Our Lady of Sorrows, have been used in the parish procession for 60 years and have both been restored in recent years. In a scene only experienced by many in a movie, the two figures are carried on the shoulders of the faithful accompanied by singing and music as they pass through the crowded streets. In conclusion, the bearers that carry the statuary through the streets re-enact the death of Christ by having the coffin of Jesus met at the feet of Mary three times before returning into Church.

It’s good to see that some traditions still thrive in Brooklyn. 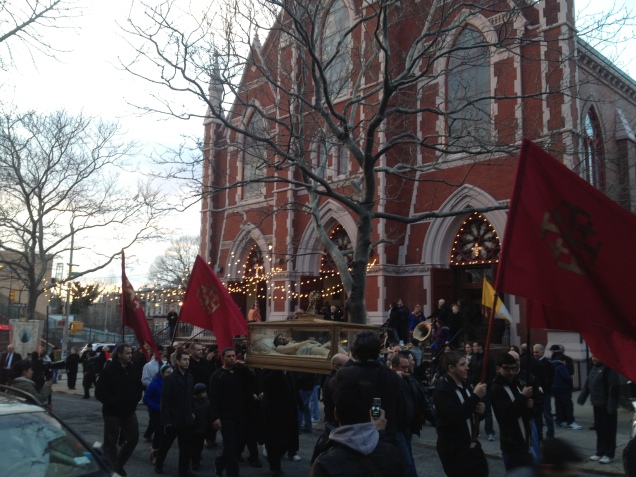 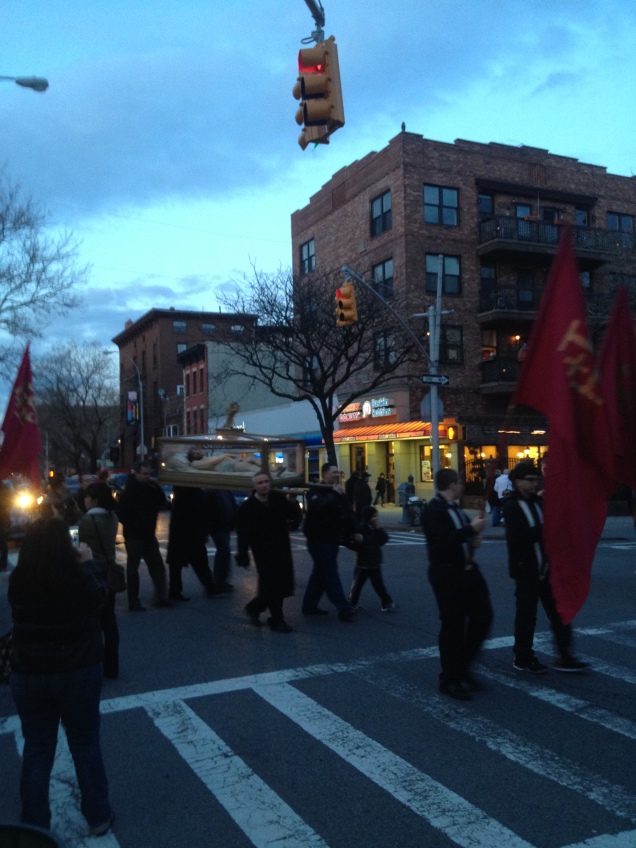 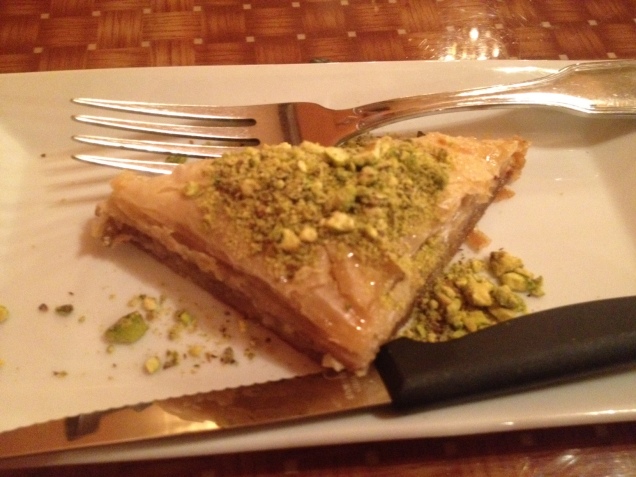 Last week, I ate dinner at Waterfalls on Atlantic Avenue in Brooklyn. While I was impressed with all the dishes, from the fatoush salad with crispy bits of pita and faint scent of dill to the eggplant stuffed with ground meat and served over a light tomato sauce, the dessert took me by surprise.

Always wanting to try something new, I asked the owner what he would recommend, fully expecting him to suggest one of the more esoteric dishes on the dessert menu, such as basbousa. Instead, he recommended the one dessert I was quite familiar with, baklava. He did so with such confidence that I obliged, reluctantly. And when I had a taste, I could see why he recommended it without hesitation: The baklava was not sickeningly sweet as it can be in some restaurants. The flavors were delicate, and I could distinctly taste beyond the butter and honey to orange flower water in the pastry and the crushed pistachios that covered the baklava.

Afterward, I told the owner how pleased I was, that I have had baklava a hundred times but this was probably the best I had ever had.

If you haven’t been to Waterfalls, it’s worth a try, whether you know Middle Eastern food well or not. Be sure to bring your own wine. And be open to the owner’s suggestions.