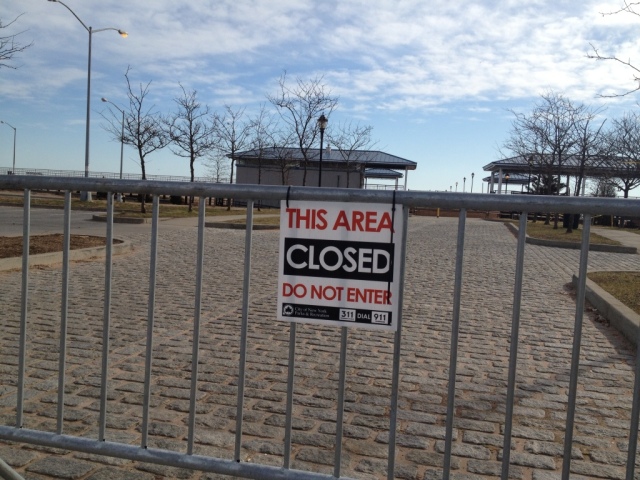 Dedicated in 1939 and renovated in the late 1990s, the Franklin Delano Roosevelt Boardwalk in Staten Island’s South Beach neighborhood has been one of my favorite places to run for the last several years. But since Hurricane Sandy, which damaged many boardwalks in New York and New Jersey, the boardwalk has been closed.

As far as I can tell, the boardwalk itself is in good shape, but the storm pulled many of the ramps away from the boardwalk, twisted the guardrails that run under the boardwalk, and pushed a lot of sand inland.

The area has an interesting history that precedes the building of the current boardwalk. From the city’s website:

On June 30, 1906 the Happyland Amusement Park opened its boardwalk doors. Taking full advantage of the summer closings of most Broadway theaters, Happyland’s amusements, stage productions, and vaudeville shows attracted thirty-thousand visitors on opening day. The amusement park continued to draw summer crowds for many years with attractions like the Japanese Tea Gardens, the Carnival of Venice, and the shooting gallery. Though the boardwalk resort thrived throughout the 1910s and 20s, fires, water pollution, and The Great Depression (1929-1939) took their toll on the beachfront resort area and the crowds eventually disappeared.

In 1935 the beachfront property was vested to the City and underwent renovations as part of President Franklin Delano Roosevelt’s (1882-1945) Works Progress Administration (WPA). Providing jobs for Depression era workers, the WPA also revived the community of Midland Beach. By removing the deteriorating music halls, carousels, and shooting galleries, the project made way for the present two and a half-mile long boardwalk. In 1939 it was dedicated to the former New York governor and president and has since continued to undergo periodic renovations and neighborhood improvements.

I asked some parks department workers today when the boardwalk might reopen, and they said Memorial Day. That’s a long way away, and I know many of us runners will miss the boardwalk between now and then, especially as the weather warms up in May and June. And it’s not just runners who will miss the boardwalk, but also walkers, cyclists and the fishermen who fish off the end of the pier in Ocean Breeze.

One thought on “Staten Island’s boardwalk and Hurricane Sandy”