Sitting under continuous arches, lined with white tiles and illuminated by nautical-themed chandeliers, the Grand Central Oyster Bar and Restaurant is one of my favorite places in New York City. As a kid, I was never a fan of oysters, but I was taught that they should be eaten on New Year’s Eve for good luck in the coming year. So, today, for the second year in a row, I will have lunch at the counter of the Grand Central Oyster Bar.

My favorite description of the Oyster Bar comes from a 2003 New York Times review by William Grimes:

Today, there is really only one restaurant in the city where diners can experience the oyster in its full glory, and that’s the Oyster Bar in Grand Central Terminal, a boisterous throwback to the days when stews, chowders and pan roasts reigned supreme…. For a certain kind of dining, nothing can beat it. At least once a month, I sit at the low-slung lunch counters for a half-dozen oysters on the half shell, an oyster pan roast and a cold beer. Everything about the experience — the din and the tumult, the oyster shuckers working double-time, the vaulted tile ceilings — is almost transcendentally New York. Lunch at the Oyster Bar is a sure-fire recipe for human happiness.

I’ve always been fascinated by the history of this restaurant. It’s been in almost continuous operation since Grand Central Terminal opened in 1913. I want to see this restaurant in its early years, and I want to know how the restaurant survived Prohibition, the Great Depression, the decline of passenger rail, and the city’s decline in the 1960s and 1970s.

Unfortunately, a search of newspaper archives does not say much about the restaurant in its early years, but descriptions abound from the 1960s onward.

A 1947 New York Times article about how to cook seafood mentions that diners will wait 20 minutes for a seat at the Oyster Bar. But the 1939 Dining in New York with Rector; a personal guide to good eating reviews dozens of Manhattan restaurants, omitting the Oyster Bar.

The best description of the restaurant in its early years comes from an entry in Mark Kurlansky’s The Food of a Younger Land, a compilation of almost-lost food writing from the Federal Writers’ Project of the New Deal’s Works Progress Administration. Describing oyster stew, Allan Ross MacDougall writes,

There is one place in New York where this stew is a supreme delight: the Oyster Bar of the Grand Central Terminal, known as a landmark on the epicure’s map. Well-traveled gourmets have been heard to say: “Prunier’s of Paris for Lobster Thermidor; Scott’s of Piccadilly for Devilled Crab; the Grand Central Oyster Bar for Oyster Stew.”

In 1913 when the terminal was opened the oyster bar was a small counter with 3 or 4 seats, set off in a corner of the restaurant. The Oyster Stew served there soon, like the proverbial mouse-trap, brought the world in a well-beaten track to this counter. It was extended and extended again. The number of seats and specially contrived cooking bowls were both augmented. Today, there are 42 seats, which never seem sufficient to accommodate the hungry crowds that in rush hours sometimes stand three deep. Commuters, snatching a hasty snack to tide them over until dinner at home, form a large portion of its regular customers.

Fast forward to 1962, when passenger rail was in decline and the city was entering some of its grittiest years. A brief New York Times review describes an oyster bar seemingly unchanged from MacDougall’s 1930s description—and our Oyster Bar of today:

The chefs here have that blithe and wonderful notion that calories were never invented. The fame of this institution is world wide and is based primarily on rich and buttery seafood stews and pan roasts. Unfortunately, the deep-fried dishes do not come off as well. Seafood stews from $1.75. Cocktails, wine and beer.

Even in 1972, on the eve of the Oyster Bar’s takeover by restaurateur Jerome Brody, the Times gushed about the counter at the oyster bar—though not about the tables:

Before heading downtown, the traditional center of great seafood in New York, stop for the “succulent oysters of the deep” at the Oyster Bar in the lower level of Grand Central Station (MU 9-0776, lunch and dinner Monday through Saturday, closed Sunday, major credit cards). Please sit at the counter. The tables are dreary. But the counter is the city’s classic oyster bar. Somehow, the oysters taste better here, more marine. Six cost $1.75. And their “famous” oyster stew is a rich dairy broth with more of the celebrated bivalves floating within. At $2.90, this stew is one of the great values, not only in food, but in anything.

In August 1974, the Oyster Bar closed its doors with no notice but a handwritten note on the door. The restaurant’s owner, Union News Company, then part of Ancorp National Services, had filed for bankruptcy reorganization the previous year and had closed about 100 eateries in the last 18 months, according to the Times. The article concluded:

Critics have long regarded the bar, where fine seafood was prepared on full view, as outstanding in the city, while the restaurant proper was mediocre.

Nick Peter, the 76-year-old head cook, who came to work there in 1919, said the bar had never changed. With a sad smile, he gave permission to publish the recipe for its famous oyster stew:

Place all but the cream in a deep pan and cook briskly for a minute, stirring constantly. Add cream. When it comes to a boil, pour over toast in a soup plate and serve.

Before the end of the year, Jerome Brody had reopened the famed restaurant. Though he sold the restaurant in 1999 and died in 2001, his description of transforming the restaurant remains on the Oyster Bar’s website:

Today’s customer of the Grand Central Oyster Bar and Restaurant can hardly imagine that the old Oyster Bar, while its title suggested seafood, was not, in fact, a seafood restaurant. Its oyster stew had become famous, but the rest of the menu could best be described as ‘continental.” Our job of invention would start from scratch—but seafood it would be.

To prepare for the decision, my wife and I toured the best-known seafood restaurants in Manhattan, Brooklyn, New Jersey, and the rest of the metropolitan area, and they were invariably full—even when the cuisine was ordinary. That is what decided me to take a chance—the same kind of chance I had taken with restaurants such as the Forum of The Twelve Caesars, the Rainbow Room, the Four Seasons, and Gallagher’s. And so, in 1974, I entered into a lease with the MTA, and embarked on inventing the Grand Central Oyster Bar & Restaurant.

By December 1974, the Times‘ Jane Hewitt gave the restaurant three stars. She began her review,

The Oyster Bar in Grand Central Terminal is back in business, under new management, following a gentle facelift to preserve its style and traditions, which span an incredible 62 years. Several former employees are back behind the bar turning out steaming bowls of creamy, paprika-flecked oyster stew according to the original recipe. And there’s a new open window, with stand-up service counter, on the ramp going down to the lower level where a commuter can down a half-a-dozen freshly shucked Bluepoints before boarding the 5:09.

In 1980, the Times’ Mimi Sheraton gave the Oyster Bar another glowing review, saying that the restaurant “remains the classic setting for clams and oysters on the half shell and the justly famous oyster stew and oyster pan roast. The menu is as distinctive as the handsome, cavernous tiled and wood-paneled setting.”

Sheraton noted that the Oyster Bar served a wide variety of fish and “usually a selection of six to eight types of oysters.” (Today’s menu, in comparison, offers 26 varieties of oysters from the raw bar.) And like food writers from decades earlier and decades later, Sheraton said, “the best place to have these specialties, as well as the creamy oyster or clam stew and the spicy, tomato-based pan roasts is at the oyster bar where you can watch them being prepared.”

In 1981, the Gault Millau Guide to New York, published only in French, gave the Oyster Bar “two toques and 15 points” (out of a possible four toques and 20 points), putting the restaurant on par with Cellar in the Sky, Claude’s, Lavin’s, Raphael and La Tulipe, and just under Lutece and the Four Seasons (three toques and 17 points), and La Cote Basque, the Palace, La Plaisir and the Quilted Giraffe (two toques and 16 points).

In 1985, the Times‘ Bryan Miller gave the restaurant two stars, saying that the Oyster Bar “has upheld its quality over the years, so that it is still one of the best spots in town for uncompromisingly fresh seafood.” His recommendation to diners: “Stay with simple preparations and savor the seafood’s freshness; sauces are not the kitchen’s metier.”

The restaurant suffered a devastating fire in the early morning hours of June 29, 1997, starting from an overheated motor in a kitchen refrigerator.  Ceiling tiles fell, kitchen equipment melted and the sprawling dining room was blackened. The four-alarm fire took two hours to bring under control, and nine firefighters and four civilians suffered minor heat and smoke injuries. Two weeks later, the 60-seat adjacent saloon was back in business, while work continued on the remainder of the restaurant and bar.

Today, on the eve of its 101st birthday, the Oyster Bar now has four satellite operations: two in Tokyo, one at Newark Liberty International Airport (where, coincidentally, Brody and business partner Joe Baum launched their high-end restaurant career with the early 1950s opening of the Newarker) and, most recently, in Park Slope, Brooklyn.

Last year in the midst of its centennial celebrations, the Oyster Bar claimed to serve its 10 millionth oyster. Cooks and owners have come and gone, but when it comes to the magnificent architecture, fresh oysters and bustling lunch counter, it seems little has changed in 101 years. 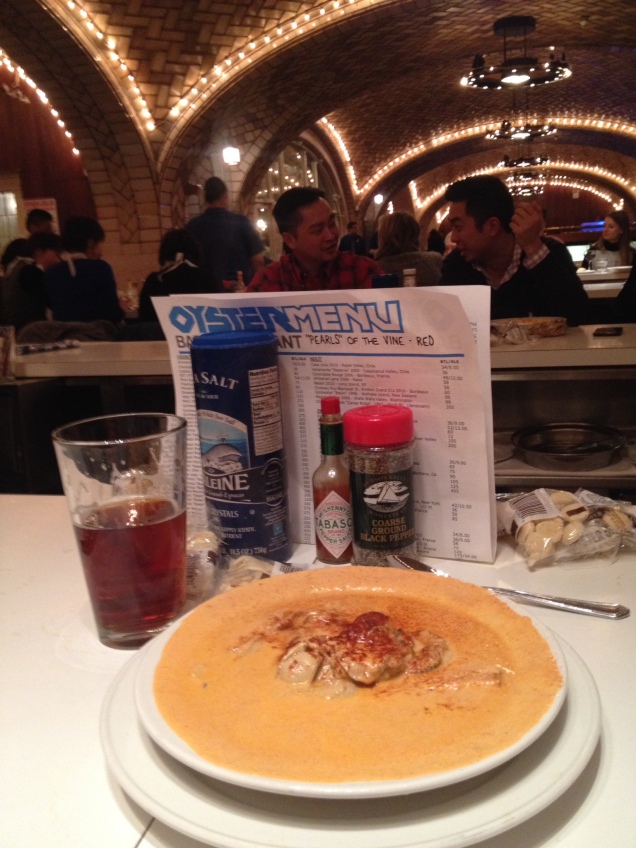