As I walked the streets of Boerum Hill on a Municipal Art Society tour last weekend, I so wanted to go back in time and see the neighborhood as it was decades ago.

Alas, that’s not possible, but the city offers its share of windows to the past.

Earlier this month, I was privileged to eavesdrop on a live window to the past, a 99-year-old former model dining in a quiet restaurant that once hosted Princess Grace, Orson Welles, Truman Capote and Jackie Onassis.

I could (and will, someday soon) write a lengthy post about the setting, Le Veau d’Or on East 60th Street, a 75-year old French restaurant with a classic table d’hote menu. Its longtime owner, Robert Treboux, passed away last year, but his daughter Catherine continues to run the restaurant.

Two Saturdays ago, I stopped in for lunch. As I enjoyed my mussels soup in a creamy broth, and sautéed monkfish with a side of scalloped potatoes, I listened in on the conversation between Catherine and a 99-year-old customer, who wore a black dress, black earrings and a matching bow in her hair.

She had some trouble hearing and her memory wasn’t perfect, but she enjoyed her meal, walked unassisted and carried on conversation better than most people my age.

“I’ve never seen a 99-year-old who can tie her own shoes,” her caretaker said.

The former fashion model came to New York from London in the 1960s. She addressed Catherine as “darling.”

I would have loved to hear her tell stories about her New York of a half century ago. But I was only privileged to small tidbits. At nearly 100 years of age, she was on her way to see the musical Kinky Boots—wearing heels.

“I do walk in heels. I’ve always done so. And that’s why I can today,” she said as she and her caretaker left the restaurant. “I don’t want a lot of help, because then you become helpless.”

After they left, Catherine and I sat over a cup of coffee and marveled at this woman’s spirit—and her class.

I am returning to Le Veau d’Or this evening for dinner. If one ever wanted a window to New York City’s past, this place is it. 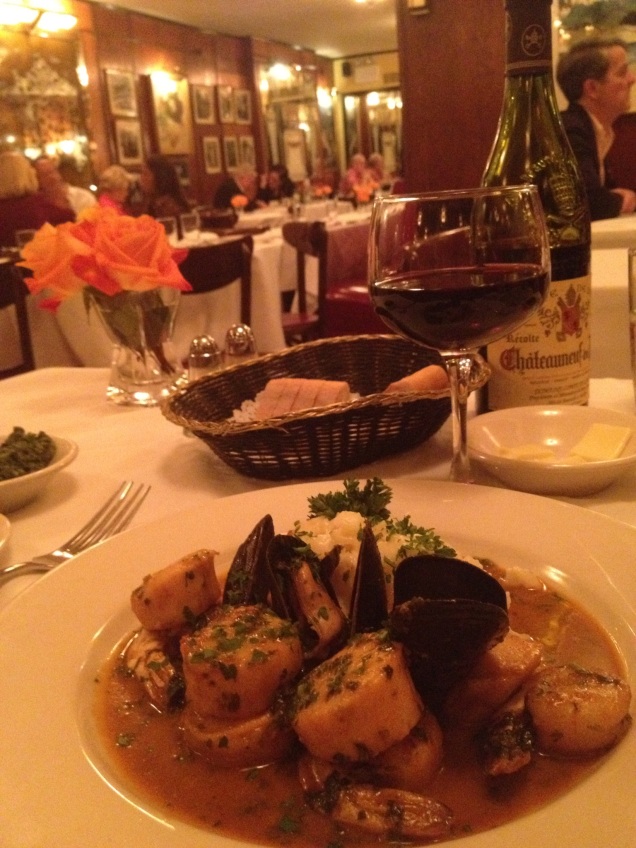