Few places in the city are as dark, isolated and ugly as Third Avenue under the Gowanus Expressway in Sunset Park. There are no thriving businesses or pedestrian traffic in the vast highway shadow.

The pre-expressway Third Avenue that Robert Caro describes in The Power Broker bears no resemblance to the space today.

Lining it … were seven movie theaters, dozens of tiny restaurants … and scores of small, friendly “Mama and Papa” stores (the Northland Gift Shop, the Finnish Book Store, a hardware store that looked like a general store out of the Old West, a butcher shop that raffled off twenty-five big turkeys every Christmas) that occupied the ground floor of three- and four-story brickfronts in which Mama and Papa lived upstairs with children.

What many New Yorkers, especially more recent arrivals, may not realize, is that Robert Moses tried to impose a similar highway on to SoHo. He actually tried to impose several  cross-town expressways throughout Manhattan, but the Lower Manhattan Expressway, or LOMEX, nearly became reality.

The details of this plan were omitted from The Power Broker (as were chapters on The Brooklyn Dodgers, the Port Authority and the Verrazano-Narrows Bridge) because Caro’s book became too long. But the 2009 book, Wrestling With Moses: How Jane Jacobs Took on New York’s Master Builder and Transformed the American City by Anthony Flint, fills us in on three Jane Jacobs-Robert Moses fights:

The final struggle is especially compelling. The LOMEX project was touted as a needed economic boost to Lower Manhattan, and politicians were eager to make compromises to make the project happen—especially since the project would be funded almost entirely by the federal government. But Jacobs’ experience taught her that no compromises should be made, that concerned residents should accept nothing less than a full cancellation of the project.

I have read (and highly recommend) The Power Broker, as well as Jane Jacobs’ most well known and influential book, The Death and Life of Great American Cities, but Wrestling with Moses fills in a lot of gaps, relating stories that were not covered in The Power Broker.  Flint’s book told me a lot about Jacobs’ life that I would not have otherwise known.

For anyone who has ever enjoyed a walk through Washington Square Park, the West Village or SoHo, this book is a great reminder of the difference that a small group of residents made in preserving vibrant city life for subsequent generations.

Below are some more photos of the Gowanus Expressway over Third Avenue in Brooklyn and the forlorn space below. 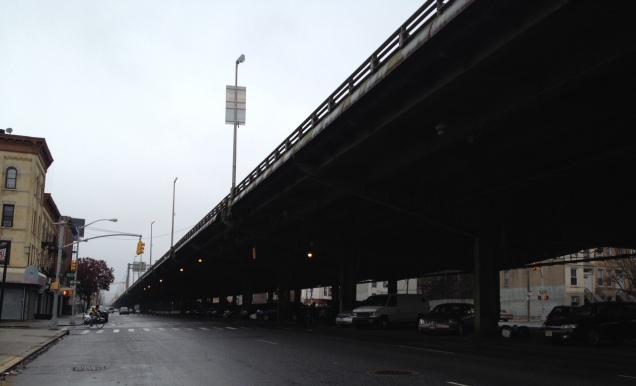